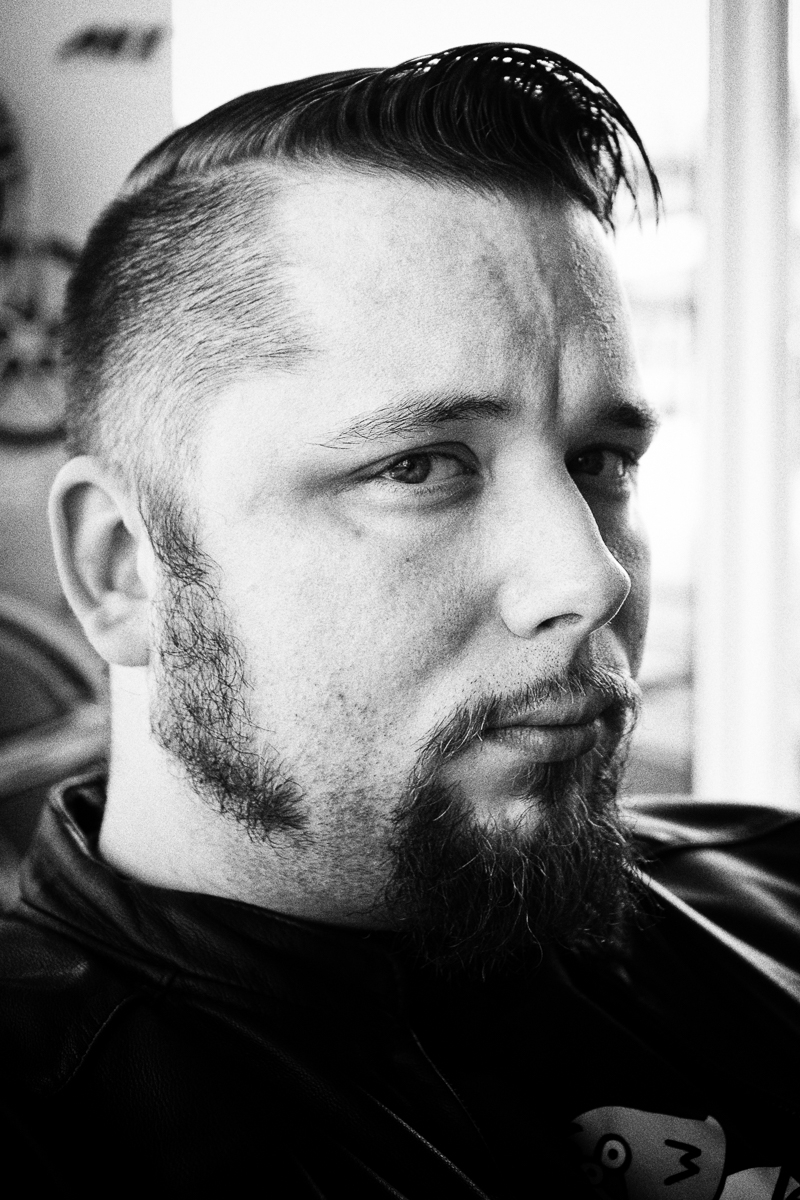 Yes … this grimace there above is me – Matthias Rathje! But this qualifies me alone for the construction of picking instruments? I hardly think! So what do I have to produce?

the manual Skills
the knowledge which is necessary and going beyond it
a sense of the design of guitars
I love these instruments fervently and also use this passion for the making also!
It all began as I started to play guitar – I was completely enthusiastic and I was always very good in woodworking at high school, so I informed me about the profession of the luthier, because I hadn’t decided my professional future yet. Everything sounded good but this I was 16 and the only position as an apprentice 600 km away
So I put off my dream and started with a apprenticeship as joiner which I completed with award three years later. I still applied to “Zupfinstumentenmachermeister” Ammann for an apprenticeship as luthier in Dinkelsbühl before the final examination. Unfortunately, he already had somebody for the job… however,I should nevertheless come past and bring my documents! So I went to the first and the last time the 600 km to Dinkelsbühl till now.

Why I haven’t gone down there again? Well, I would have got the job – master Ammann was super nice and Dinkelsbühl is a beautiful town, but Mr. Ammann didn’t make any secret from the economic future of his appointing stand: “Pal, I won’t lie to you, you don’t get rich with the construction of guitars. And either you work after the education in a factory or you make the master and open yourself a workshop!“
I requested a little time for reflection and returned again into local realm. I called him two weeks later and canceled – he then took the trainee anyway he had in the eye before! To open a own shop in this buisness was too risky to me and I could build guitars in a factory also as a joiner!

But I had a grave problem now – my dream had been bursted like a soap-bubble! Had I aligned my whole life with it anyway . What should I do now? I really didn’t want to spend the rest of my life as a joiner. Don’t misunderstands me! I love this profession, I love wood, but I had the feeling anyway that my possibilities weren’t exhausted yet! I decided to educate myself further, after all, this can never harm!

I had my first schoolday at the subject secondary technology school one day before my practical final examination. I in addition had a job for a furniture house as furniture packer and house joiner. The time passed . I did my subject matriculation standard, got my convention notification for the military service and bridged the time until the convention by working for my old education company as a stairs joiner.

Although have the nine months in the Federal Armed Forces taken me not a bit further, but I had my fun with wobbling with a 11 t aluminum lump (they called it “tank”) by the area !!! During the time at the military I heard of the technological highschool for instrument making in Markneukirchen. I asked about the access prerequisites and had to notice that I didn’t satisfy all criteria despite my previous experience. I still had to produce a traineeship with an guitarmaker. I had to learn that its quiet hard to find a trainee place in this buisness and it took a long time to search . During this, I followed the job as a stairs joiner again. At this time I also built my first E guitar, the “NU X Plorer”. .

I called Boris Dommenget sometime to ask for the whereabouts of my application . “I never got this one!”, he said. I had sent it to the wrong address! I got a refusal at first anyway. He takes no trainees, because young people have an extremely wrong idea of this job in their heads mostly.

In addition, they would do more work in that they are of use! He referred me to Mr Wichmann from Hamburg – this one takes trainees at the regular tape! I called this sir and was turned away curtly, he was extremely unfriendly !!! In this sense, greeting to Mr Wichmann!
Boris had offered me, however, that I can call him once again if this wouldn’t work with the Wichmann! When I dropped the word joiner at this telephone call, I had an open ear with Mr. Dommenget. I would have been supposed to say this at once anyway! I shall come past and bring my guitar best! So I stuck my NU X Plorer with her form suitcase under the arm and drove to Balje. Boris was filled with enthusiasm heavily by the form suitcase… the guitar wouldn’t be from bad parents either – but this suitcase…

With the next first one I began as 3rd trainee ever at Dommenget-Custom Guitars. I learned a quantity about the construction of guitars and their repair – for what I would like to thank Boris again in this place! It was a pleasure to learn from a really big one in this trade! I would like to describe me as such because even if I have never taken an examination as a guitarmaker …from the heart! Sizes like Angus Young (ACDC), Doug Aldrich (Whitesnake), Rudolf Schenker, Matthias Jabs and Klaus Meine (all three Scorpions) and Eric Bazilian (Hooters) have played on instruments in which making I was involved! Somehow a beautiful feeling! After half a year I then left Boris workshop melancholic to care about a place to stay for my studies.

And now I sit in my apartment here in Hildesheim today and design my first own web site! The attentive ones under you will wonder now: “Moment . Hildesheim? Why not Markneukirchen?”Paid attention well!

During my traineeship I had to admit to me painfully that master Ammann already knew what he talks about, at that time! I have seen it with my own eyes: Boris Dommenget is one of the best guitarmakers of the world for many (me inclusive)… and these times are itself no golden for him! How shall one come onto a green branch as a newcomer then? I have therefore decided against the studies in Markneukirchen and for the only alternative, wood engineering in Hildesheim.

Sooo…You know now who I am and what I do – so don’t be shy to contact me now – I would be very pleased about feedback of any manner !!!

Skip back to main navigation